Is Social Media Working For Retailers In Canada?

Social media is popular among Canadians. In a recent Fusion Analytics study of over 1,000 adult Canadians 56% of retail consumers in Canada stated that they had recently used Facebook, 38% said they used YouTube and 9% said they used Twitter. Facebook was the most frequently used social media, with 33% of Canadians checking Facebook every day. The survey was conducted online using Fusion Analytics' national household panel between Nov. 1st and Dec. 31st, 2012 and is balanced to reflect the overall make up of Canadian retail consumers.

But can advertisers benefit from this trend? In retail the results so far have been mixed. There is no doubt that the digital revolution is here, with online TV usage growing rapidly: 40% of young adults (aged 17 to 24) stated to us that they now watch more online TV than cable TV and 48% of Canadians have gone to at least one retailer's website in the last month.

In the media effectiveness models Fusion runs for over a dozen retailer clients we find that a retailer's website can be a high return-on-investment (ROI) tool. So we don't have issue with all kinds of digital media, there is lots of buzz specifically on social media and it is here where the results are concerning for three key reasons.

In a follow-up series of focus groups we heard the same comments from consumers over and over - "I use my FB ONLY to connect with friends and family who do not live near me. I do not use it for shopping." In consumers' minds media have different roles. Consumers read fashion magazines as much for the advertising as for the articles, consumers read flyers to look for deals, they go to a retailer's website to get more product information. The role of social media on the other hand, particularly for retailers (the focus of our study), is very limited in consumers' minds and this is causing difficulties for advertisers. 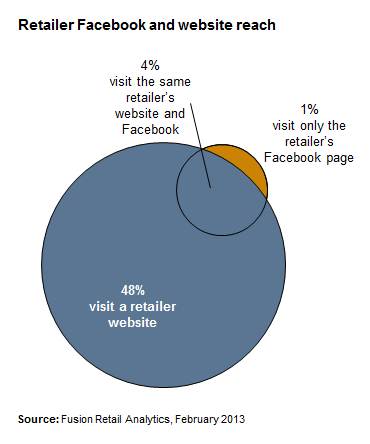 Second, a key driver of media ROI is total unduplicated reach & frequency (TURF). Most statistics today will be able to give you usage data for TV viewership, website clicks, Facebook likes and so forth. More exposure is good, but exposure comes in two forms, either the same person sees your advertising many times (frequency), which is effective for re-enforcing a message, or many different people see the advertisement only a few times each (reach), which is effective for building awareness. Both reach and frequency are important and deciding how to tilt between the two depends on your current opportunities. The key regarding social media is that it is very good at frequency, but poor at expanding reach. For example, if a retailer had only a website, with no social media presence, it would on average reach 48% of consumers. Adding a Facebook page would then expand the retailer's reach by just 1%, to 49%.

Third, social media is poor at reaching out to new customers. At Fusion we measure the ability of all media types to reach consumers based on the consumer's orientation to a retailer (what we call TURF 2.0). For example, how well flyer, radio, out of home, TV and social media reach and are consumed by existing loyal customers, versus how well each reaches out to consumers who don't know of or like a retailer. This leads to a natural division of media into two broad categories. In one category are active media, where the consumer has to take action to consume the media. For instance, to read your flyer consumers must take it out of their mail box and sort through 16 other flyers to find yours, making it a very active media. In general flyers, catalogues, websites, in-store brochures are all active media.

The other broad category is passive media that requires no effort from the consumer. For example, a consumer watching TV when your commercial comes on automatically is exposed to the commercial without having to take any action, in fact they have to take action to not watch! They have to look away or flip the channel. Magazines also work this way, a consumer reads a magazine and their eye naturally will land on your page. This is passive.

So what is Social Media? It is active and that is bad news because it ruins its effectiveness. On Facebook a consumer has to go to your page, and for you to get on their wall they have to click "like." This works well for your existing core customers. In fact when done right, social media can do reasonably well at deepening a relationship with your existing customers and can even reduce the cost of marketing to them. But the problem is that most retailers already have strong contact with their existing customers: they make up most of the visits to a retailer's website, they make up the vast bulk of a retailer's email database, they read the retailer's flyer, they get exposed to in-store signage/brochures and they talk to associates on the sales floor. It is the potential customers, those outside of your consideration set, that are under-communicated to and it is only through passive media that they get exposed to a retailer's brand. However, many retailers have almost no passive media budget, they often end up allocating 100% of their media to core customers!

You don't want to forget about your core, existing, loyal customer, but they can only contribute 2-3% sales growth a year. Explosive sales growth, growing your sales by more than 10% a year, requires growing your customer base, which means using passive media to capture incremental customers.

Conclusion: Many companies are expounding social media as the "next big thing" in advertising, when in fact so far it has been the "next small thing." It should be part of your tool-kit but shouldn't distract from much larger wins.